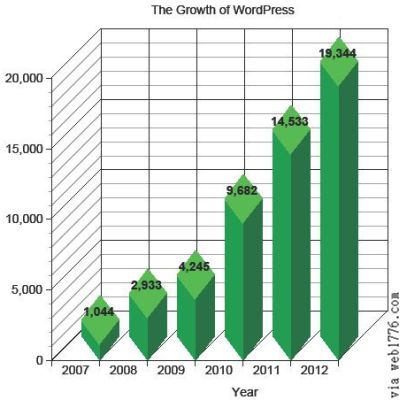 Pay no attention to the man behind the curtain. What does he know about WordPress or WordPress Growth?

Turns out quite a lot. I’ve mentioned Tom McFarlin here once before, and the more I watch him the more I think Tom might be one of the smartest guys playing the WordPress game. This morning, Tom wrote something that smacked me right between the eyes.

I wrote a long comment at Tom’s blog, and as I was doing that I realized I needed to post it here, too, because despite our attempts to talk about The WordPress Helpers Mission and my long rants about the not-exactly-friendly way our appearance has been greeted by elements of the established “WordPress Community“, I expect that something may not be apparent:

The Goal is WordPress Growth

React cynically if you choose, but there’s no need; I’m happy to say right out loud that WordPress Growth—a bigger WordPress—equals more success for The WordPress Helpers. It also means more success for the folks who have thus far made up “The Community”. And as Tom McFarlin and I agree, it will require changes to the way people see and do things.

The reason we started The WordPress Helpers has everything to do with this. The WordPress Community has become—as happens—moribund. THAT, of course, is a problem. ALWAYS. It isn’t about large or small or who’s involved; sharks that stop swimming die.

From a market-share perspective WordPress has become huge. And forget about Matt Mullenweg’s goal of WordPress Growth to fifty percent of all web sites; that’s going to take time and the goals will shift  and re-shift again. Fact is, running 23% of all web sites after eleven years, when you started as a blogging platform, and with MANY options available is … amazing.

But WordPress has grown by following a particular path, and that path and model are showing their age. The chart here stops at 2012. By the end of 2014 that 19,000 number you see (it represents plug-ins in the official WordPress Repository, by the way) was up to 35,000. Sustaining the historical WordPress growth rate for much longer will soon be impossible even if more people—the people who are attracted to Wix, Squarespace, et. al.—can dive into WordPress and get similar results.

And it really is about people. People need help. “How to setup your WordPress Site in 147 easy lessons” won’t do it, not only because that’s too much. but because at the end a very large percentage of folks who simply followed along will have exactly the same site, and then will either have been better off with Wix, after all, or realize they have a problem to address.

So WordPress Growth is a matter of keeping dialogue going. Addressing tasks as they come up. Doing it in and with the native tongue (which isn’t PHP, or CSS).

You know; staying flexible—the opposite of moribund.

WordPress Growth is looking like a big job. The kind of job that takes a village. And if we wait to make it about competition, there won’t be a village left to nurture. Because the competition will have already left WordPress behind.