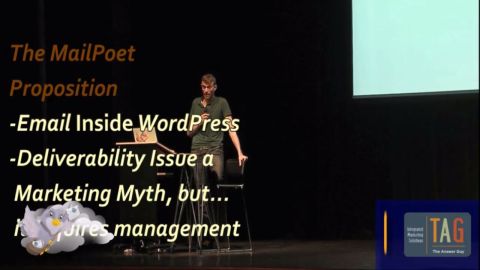 I recently came a across a WordPress plug-in that’s changed my life.

It hasn’t made me happier, or wealthier. It hasn’t saved me time—in fact, it’s cost me time in a number of ways. And the funny thing is that it’s actually a secondary time-suck to ANOTHER WordPress plug-in that I spent a not-small amount of money on—for which I’ve thus far been rewarded by needing to help debug a piece of software that may one day be very cool but so far is only cool-in-concept.

This plug-in—this little piece of software that’s made me both happy and miserable—is called MailPoet. I’ve been conversing with Kim Gjerstad, one of the partners at MailPoet, and he and I are new LinkedIn buddies.

Kim gave me permission to use the video of a talk he presented at WordCamp Europe last year as the basis for an article. You’re reading that article right now.

But the more I thought about how great Kim’s speech was the more I realized that one article wouldn’t do it. Kim Gjerstad, a young guy in France operating a small company that gives away ten times more software than it sells, has changed my life.

The amazing thing is that Kim doesn’t actually say anything earth-shattering in the video you see here. The video isn’t well-produced, nor did Mr. Gjerstad present his MailPoet for WordPress war story in the most cogent way. What matters isn’t the video, but the message. On the other hand, as Kim says right at the beginning, he was a last-minute replacement speaker at WordCamp Europe 2013. So kudos; Kim Gjerstad’s partly-off-the-cuff talk is fantastic, and he’s fun!

What’s amazing is that in this twenty-minute presentation Kim Gjerstad tells you more about online marketing, the software business, how the software business is changing, customer service, and who he and his partners at MailPoet are than … actually, probably more than he intended to.

And that’s a good thing. It speaks to both transparency and authenticity, the idea of a personal marketing-cum-media brand (something Brian Clark, another online buddy of mine, has plenty to say about), and the absolute need for all of those things—and the fact that unless you create and follow a structured business process you’ll never pull all of those things together.

So here’s MailPoet’s Kim Gjerstad. I know that 20 minutes is a long time to commit to, but I promise that if you’re looking to build out your business and establish business process management it’s the best twenty minutes you’re going to spend on anything this year.

Except, of course, for what’s coming up; for the next few weeks Answer Guy Central is going to be MailPoet/WordPress/Kim Gjerstad Central (the video annotations are a hint … ). And if you want to learn how content and media marketing REALLY work, you’ll be glad we are.