WordPress, great as it is, can be incredibly frustrating under the wrong circumstances. This is what we had in mind when we wrote about action versus inaction earlier this week; in WordPress you need you know what to do, and what to NOT do, and a great theme covers a lot of that.

While there are many variables that effect how you should choose a WordPress theme, including important issues that are more about theory than actual selection, the largest one has to do with whether you’ll know how to use a theme after you’ve selected it.

Several years ago, WordPress introduced a feature called The Customizer. The Customer is a panel that theme develoopers can implement to make controlling how a theme looks and acts easier. It’s a great idea.

Here’s the WordPress customizer as it appears at Answer Guy Central and at PC-VIP. The differences are obvious … unless they aren’t: 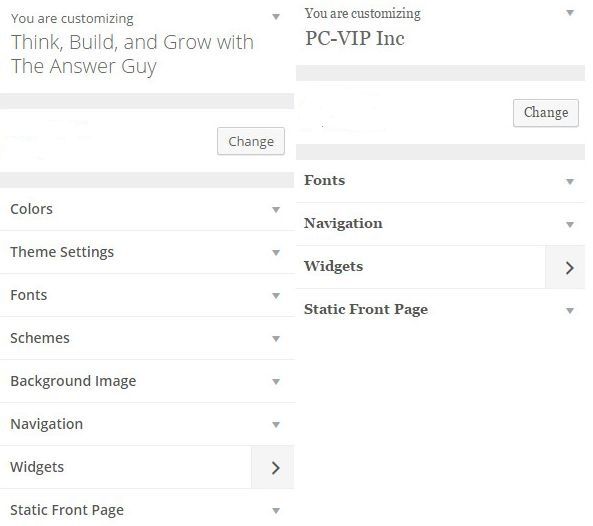 No big deal, if you approach the matter from a “the themes do different things” perspective. But the WordPress Theme Customizer isn’t much of an example of making WordPress easy if you need to understand what’s behind varied menus and tabs as you move from one theme to another. And it gets worse: many of the options for controlling each of these themes hides a different control panel—a WordPress Customizer, if you will.

Wait; it gets worse.

Viewed as a convenience, The WordPress Customizer is a great idea. But WordPress has made using the (non-standardized) customizer a prerequisite of getting your theme posted in the WordPress Repository. And at the moment, just 24% of the themes there use it.

It’s not unlike the WordPress 4.2 Problem and similar to a problem we see with developers at all levels. Someone in the decentralized beast that is WordPress had an idea, passed it through a committee of people with incomplete understandings of the ramifications of their actions, and now we have a not-well-enough thought-out rule that effects WordPress Business Decisions.

We’re getting worried. As we promised here, we’re about to publish an article about the upcoming WordPress REST API. And if you think the issues with WordPress Customizer are complicated, just wait until you see what REST will do when it comes to “making WordPress easy”.