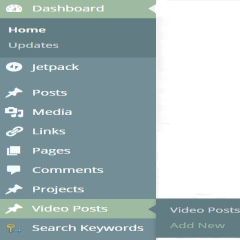 At The WordPress Helpers we love WordPress, but there are things about WordPress that aren’t perfect. One is that WordPress wasn’t always the robust content management system it’s evolved into, and as a result features like custom post types could be better. In short,

We’re not trying to be harsh on this issue; because the WordPress database includes backward compatibility with the earliest iterations of WordPress, there are some things that can’t quite be fixed in core WordPress functions. This is one place where plug-ins are incredibly useful.

In the image on top of this article you can see a piece of the WordPress menu from our sister, Answer Guy Central. “Video Posts” were something we grouped together there for a series of … you guessed it … video posts that we did in 2013. Video Posts are a custom post type, and they appear in the menu hierarchy, as do “projects”, at the bottom of the part of the WordPress menu dealing with taxonomies.

Which, let’s be blunt, is the wrong place for them.

As it exists natively, The WordPress Custom Posts Hierarchy isn’t really a hierarchy at all; Custom Posts are simply dropped into your WordPress administrative menu. Again, this is a matter of WordPress maintaining its roots in the much simpler blogging platform it once was, and we’re not going to judge that decision. But wouldn’t it be great if you could group your custom posts in a way that actually made sense?

You can. If you’re using Custom Posts check out the Hierarchy plug-in. Voila! Go set up your WordPress custom posts hierarchy as a hierarchy.