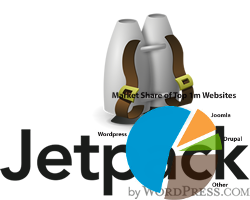 Yesterday being April Fools Day and geeks being the type of people most likely to find April Fools jokes funny, an April Fools concerning WordPress’ Jetpack plug-in made the rounds. We saw it several places, with the site below being only the first one and WordPress CEO Matt Mullenweg’s personal blog being another.

The joke was that Jetpack, being Matt’s not-so-secret weapon in the get-WordPress-to-fifty-percent-of-the-Internet war, would now bundle WordPress itself as module #37. Obviously a joke, right?

Of course it was a joke; WordPress doesn’t do Jetpack Marketing by forcing it down your throat (yet), and the idea of the parent product being bundled into the child is silly.

Sure, it makes no sense that a non-WordPress user would ever go searching for WordPress Jetpack, but with Matt having acknowledged that Jetpack Market Share is the primary driver behind WordPress’ growth plans, why not do this kind of Jetpack Marketing? It’s just a few extra downloaded bits, after all, and anyone who IS a WordPress user has encountered that “where did I leave my copy of WordPress?” issue.

That’s weird, right? Even The WordPress Helpers doesn’t think THAT far outside the box, do we?

Actually, we do. Growing WordPress to 50% of the entire Internet is an near-impossibly large challenge, and everything above is true; it IS just bits, and people will install WordPress more often—even if just a bit—if they “have it”. And even if that doesn’t ring true, the very idea of long-tail marketing is that more words equals more return; WordPress could increase their hold on the Jetpack brand by … using it more.

Think this is just a day-after-April-Fools joke? Jetpack Marketing!