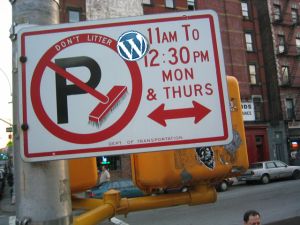 If you’re sufficiently pessimistic about new opportunities, it probably pays to stop driving around. Opportunity is often where you decide it is.

Albert Einstein, of course, was not a WordPress Expert. He could have been were he around today; maybe he would have even wanted to! But the father of the Special Theory of Relativity had bigger things on his mind.

April Fools Day plays really well to the geeks among us. So when an April Fools Joke concerning WordPress’ Jetpack plug-in made the rounds we took notice; it might not be a joke, at all!

What do you do? How many customers do you have? What’s your member count? Is that last one anyone’s business? Either way: should you lie about it, to look bigger than you really are?

Several weeks from now, websites that don’t play nice on mobile devices will start losing SEO juice, and Google sent us a note that our parent company’s site was about to get hit. Some WordPress Theme Documentation would have helped ease the pain.

Security is almost as important to your WordPress efforts as the look and function of your web site. And because of WordPress’ size, there are all kinds of bad guys out there trying to hack in, all the time. Wouldn’t it stink if the bad guy was right inside your WordPress Theme?

We say managed WordPress hosting is a bad idea, right? No, not at all. Depending on your needs and willingness to handle administrative and backups chores, hosted WordPress can be a great idea. This story is about support. Really great support—if not support with a really great answer.

Some Communities seems more concerned with protocol that actual community usefulness, and at StackExchange, Thank You is noise. Yes, Seriously.