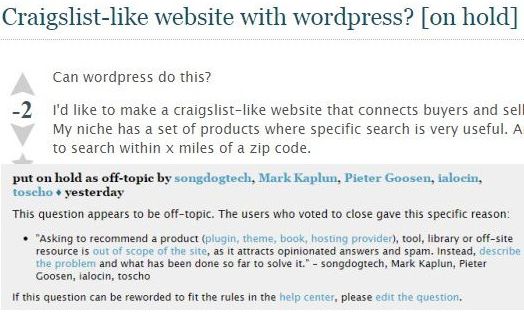 The five words above are rife with problems, because “let’s”, the contraction for “let us”, means we have something for you that will make Fixing WordPress Support happen. And actually, we are about to announce something cool; several of our partners are working toward addressing WordPress support problems.

But let’s start with why fixing WordPress support is such a problem—and so important.

There really is no such thing as “WordPress Support”. That’s not to say that you can’t find people who know plenty about WordPress, both at WordPress parent Automattic and elsewhere, but that there’s no officially-sanctioned, always-the-right-place-to-reach-out-to-although-you-might-need-to-pay place that you can call and get answers to your WordPress questions. Microsoft has one. Apple has one. “WordPress” does not.

The page we’ve linked below and copied in this article’s illustration is one of the most egregious examples, and while StackExchange is consistently about as militant an example of the problem that you’ll find anywhere, this instance is merely convenient for this story.

The person asking the question was vague, but when someone asks for help and your response is essentially “you’re too stupid to warrant my time and I’m going to ridicule you for it”, something’s wrong.

It makes us think of comments we made about The WordPress Community when we launched; when you believe you are the community, you reduce the community’s value.

Fixing WordPress Support won’t be easy; it starts with questions like Why Does WordPress Not Work Like My Other Software?, ends with simple frustration as you pick up a manual and hope for the best, and in between takes issues like how WordPress can maintain its growth into account. But we’re working on it, and would love if you helped.