Via Persephonemagazine.com
(this guy watched the Geek Fight)

Yesterday, I spent a long time on Twitter, engaged with a small group of people who either love WordPress, make their livings from it, or both (note that “yesterday” means January 22 2015; the date on this article’s heading has been altered to control our geek fight – watching friend’s appearance in the site header).

These folks were taking The WordPress Helpers to task for the way we’ve announced ourselves and what they consider to be a certain disrespect we’ve shown The WordPress Community. I’m here to explain a few things and also apologize.

It’s my nature to take people seriously. This is a “for better or worse” kind of thing; I often miss the emotional position that’s present when people are venting, so while I mean complete respect in answering people’s questions and concerns, I tend to come off as professorial—even pedantic. I apologize for this, wholeheartedly.

I’m also going to offer what I expect will be viewed as less sincere apologies on some issues that have arisen. Please trust me; my sincerity is not at stake.

A couple of participants in yesterday’s festivities suggested I should explain the decisions we’ve made in handling The WordPress Helpers’ launch. The issues that were brought forth seem to fall into three basic areas:

To point #1: there is a right way to introduce yourself. I’m old; I was taught this stuff as a child and an adolescent. You look people in the eye, you offer a firm handshake, you say “pleased to meet you”. Like that. In the digital age, though, where being forward will get you in trouble and you often don’t ever meet the people you work with, this is pretty much impossible.

I suppose that the analog then becomes another idea that was popular when I was young: children should be seen and not heard. Regardless of our goals, purpose, intent, funding, or whatever, because The WordPress Helpers was new we should have waited to be recognized, laying groundwork by volunteering in more traditional ways than we’re trying.

To this I say “no”, both because we have goals that I cannot allow to be subrogated to the desires of others, and because in business, you don’t wait around for others to recognize you.

There’s no crying in baseball, and there’s no paying fealty in start-ups; the goal is disruption

I’ve already covered the first half of #2. As for the second: one of yesterday’s participants suggested that this article about Writing a WordPress Post and this one about the difference between posts and pages had been disrespectful to the authors of the stories on which they were based. Nothing could be further from the truth. I believe Lorelle VanFossen stopped short in her description of the process of crafting a post correctly, and that Bob Dunn explained the points in his piece well but also stopped short of being useful enough to the audience at which it seemed targeted. But they were great articles, we said as much, and I had a long back-and-forth with one of those authors in the days after the referring article was published which I believe would show our respect if we published its details here; we will not do so, because we promised not to.

Is this the idea of paying respects to your metaphorical elders coming up again? Sure. Is it also about not tipping apple carts, rocking boats, or some other metaphor for “this is how things are done and we don’t want to hear any dissent or criticism”? You bet. Well, when you’re trying to get things done the elders thing doesn’t fly, and the point of The WordPress Helpers is to shake up the status quo. We believe that the existing WordPress Community, made up as it is of smart, experienced, lovely and well-meaning people, is nevertheless missing a crucial fact:

To borrow another old cliché, when you’re a hammer everything looks like a nail. One of the yesterday’s exchanges consisted of me saying that I’d encountered users who complained that they “didn’t get WordPress”, and then being challenged to produce a count of those people.

The implication, of course, is that I was either making it up or using a single instance of someone being lost as significant. Neither is correct; as I explain in our About page, The WordPress Helpers came to be after one client too many complained that the theme she’d bought “didn’t work”. The geeks know it works, so Geek Fight, indeed! We have nothing but respect for the “members of the WordPress Community”; it’s simply time for that community to expand, and anecdotal though the example I’ve just cited is, our observation is that it’s representative of the way things are—and I’ll say again, we don’t do status quo.

Bringing me to point #3. Why have we included the nine letters that spell “WordPress” in our domain name?

This one is tricky. It involves a lot of complicated, correct-use-of-a-trademark ideas that I know we’re going to be slogging through with The WordPress Foundation and its attorneys. I won’t discuss those here, both because you’d fall asleep reading them and because it would be imprudent to do so. However, I do wish to address “The Community” bringing up the topic.

I’d been scolded about this before, both when we reached out to a handful of people in November, and in the Twitterverse in late December. I’d assumed initially that the Community members who were banging on this issue were either trying to show off how smart they were or—speaking of paying fealty—protecting what they believed were the interests of the wonderful company responsible for bringing WordPress to the world. And either or both of those assumptions might well apply in any given case. But I learned something new yesterday, and I wish to both acknowledge it and apologize for not having understood it earlier.

As I said above, we have different ideas about what’s “allowed”, and what that means in a world of business, trademarks, and positions that some people might take. The WordPress Foundation, which administers intellectual property on behalf of Automattic Inc, the commercial entity behind wordpress.com and at some level, wordpress.org, prefers that people not use domains with “the nine letters” in them. That, however, is a different animal than the folks on Twitter are shooting at. What I found out yesterday was that these people, the people who believe they “are” the WordPress Community, aren’t offended that we’re treading on ground “WordPress” would prefer we avoid so much as they believe they are WordPress.

This idea actually has some merit. While Automattic and/or The WordPress Foundation “own WordPress” and administer it, quite a lot of the code in WordPress is written by volunteers. AND I KNEW THIS. What I absolutely didn’t account for in my thinking up until yesterday’s dressing-down was that because that’s true, WordPress volunteers have a personal attachment to the project that makes their position as defenders of the realm more than just the kind of angst more often associated with what I heard yesterday: “if that was allowed we’d have registered your domain name years ago“.

Folks, are you listening? I apologize for not understanding that. I do, I swear. I missed just how important WordPress is to you and why. Mea culpa.

None of which changes the way we make business decisions, by the way, nor our belief that the idea of who is “in the WordPress Community” needs to expand, and the new participants need a different set of tools at their disposal than the existing community creates, uses, and promotes both among its members and commercially.

Now here, aside from my apology, is the most important part:

WordPress is magnificent. Were that not true we wouldn’t have started The WordPress Helpers nor be approaching it the way we are. But WordPress’ days of continuing double-digit year-over-year adoption growth are going to end soon, and if The WordPress Community wishes to see the influence of its baby continue to expand it needs to understand real users better and start catering to them.

Like I said: this is about disruption, not maintaining status quo.

I hope the members of the community see that this is a good thing for them. A larger, more comfortable community gives them a better chance at greater success, and The WordPress Helpers is all about nurturing that larger community. So with my apology offered yet again, now I’m also offering both an olive branch, and something more.

Tell us what to do next.

No, don’t tell us how to do business, at least not until you’ve looked me in the eye, shaken my hand and helped me understand that you also believe we’re on the same team. But if you want to join our advisory committee, or write here, or tell us what’s right—or wrong—about our technological approach, or join our community and help it grow so that more people see you as the experts you are, please, come on in.

The WordPress Helpers has been live for less than ten days. As of this morning, this is our ranking popularity, according to Alexa: 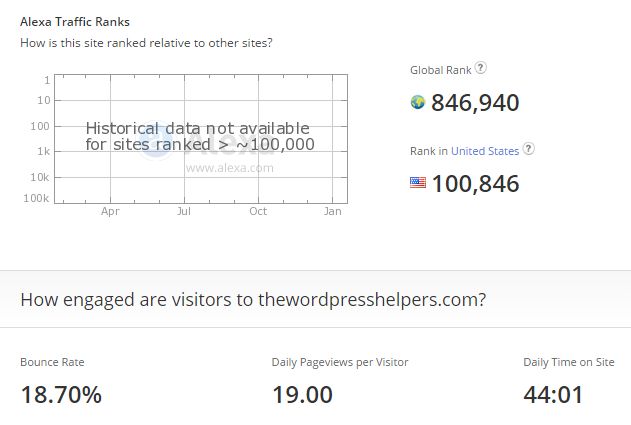 Depending on what you know about web rankings, being in the top 850,000 most popular websites in the world and top 100,000 in the United States will either impress you, or not. I’ll tell you it puts us ahead of over 99% of all web sites, but I’ll also say that means very little. And getting there in ten days is a whole different metric.

However, our bounce rate, the number of pages each visitor views, and especially the amount of time visitors are spending here are all, well, astounding. Self-congratulation? Sure. But mostly I’m talking to the folks who aren’t sure this thing’s on the right track and asking, again: maybe you’d like to work with us?

Geek Fight? No more. This is a big community; let’s make it even bigger—and better. Because it turns out that Angry Twitter is actually bad for your health.

Article Title:
Geek Fight!
Subject:
Yesterday I went to a geek fight and a hockey game broke out. You may not understand that old boxing match/hockey game joke, but you'll get the geek fight that took place on Twitter, yesterday.
Author:
The WordPress Helpers