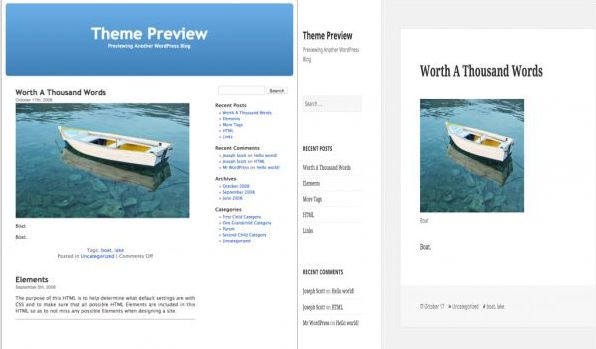 As we’ve been traveling this journey, I’ve come to know a few really smart members of The WordPress Community. We’ve been viewed with a suspicious—even antagonistic—eye by quite a few of the people who think of themselves as members of that community. Nevertheless, I’ve gotten to know some great, really smart men and women as The WordPress Helpers has been rolling out.

One of those great folks is Tom McFarlin. Tom’s a genuine geek; a developer of the highest order. He’s also got a rare knack, “despite that” for making sense and knowing how to communicate in regular, accessible English. And Tom’s just published the article we’ve linked below.

Tom asks a great question: Is there such a thing as a timeless WordPress Theme?

Ultimately the answer is no, unless your only criteria for answering is rooted in nostalgia. But I’ve been involved in a conversation at Tom’s site that in some ways wraps up the mission of The WordPress Helpers.

In the simplest sense, looking at the very-old-school WordPress Kubrick theme beside WordPress’ current “state of the art” default Twenty-Fifteen suggests that there’s been very little WordPress Theme Evolution over the last ten years or so. Sure, the elements are … cleaner? nicer? … now, but the basic construct of “two columns, one for content and the other for “stuff” is still the same. And there’s a lot going on behind the scenes in both Twenty-Fifteen and WordPress itself that didn’t used to be there; whether you use Twenty-Fifteen or another theme (and by the way, Twenty-Fifteen is customizable in ways that may well make it all the theme you need, even for a business website),WordPress today is a genuine Content Management System. Back in the day, it was “for blogging”, and little more.

But that’s the point of a conversation about timelessness (and whether you want that—and why) and WordPress Theme Evolution. Sometimes, the best evolution is the one you can’t see.

The Timeless WordPress Theme
Free Stuff!
No charge. No SPAM. Unsubscribe any time.